Find out what exactly biosimilars are, how they distinguish themselves from the original and which patient groups benefit from their use here.

Biosimilars are successors of previously patented biopharmaceuticals. The initial patented preparation as well as its successor(s) belong to the group of biologicals. These are pharmaceuticals manufactured using modern biotechnology. As opposed to the classic, chemically synthesised pharmaceuticals, biologicals are produced using living cells. An important distinguishing feature is therefore already contained in their name. Due to their biological origin, biosimilars are only ever highly similar to the initial patented biological – never identical. The molecules contained in biosimilars are bigger than those of chemically synthesised pharmaceuticals, such as generics, and much more complex in their composition. That is why they are often referred to as ‘high-molecular active substances’.

What is the difference between a biosimilar and a generic medicine?

As opposed to generics, which are manufactured via chemical synthesis and thus contain the identical active pharmaceutical ingredient(s) (API) as their previously patented original, biosimilars are produced using living organisms, mostly living cell cultures. For example, most of the biological active pharmaceutical ingredients currently available on the market originate from bacteria, yeast cells or mammal cells. Using biotechnological processes, they are genetically modified. For this reason and as opposed to generics, they are never absolutely identical, but always comparable and highly similar.

Where do biosimilars mostly come into use?

Biosimilars are used especially in new and advanced therapies of severe, chronic and life-threatening illnesses. Biosimilars authorised in the EU, including active pharmaceutical ingredients (APIs) such as adalimumab, filgrastim, infliximab and rituximab are mostly used in oncology for cancer treatments, to treat diabetes or rheumatism. Additionally, biosimilars are prescribed for chronic-inflammatory bowel diseases like Crohn’s disease, in dermatology to treat psoriasis for example, in the treatment of multiple sclerosis, in dialysis and for disturbances of growth. Biosimilars come in different pharmaceutical forms, most frequently as liquid solution in a syringe or infusion via intravenous drip. Analogous to their reference product, biosimilars are often authorised for use in the therapy of several illnesses.

The more recent the patent expiration, the faster the respective biosimilars entered the market.

Biosimilars lower the prices. Not only are they inherently cheaper, they also cause a reduction in the price of the original / the reference product.

Thanks to biosimilars, more patients have access to therapies with biologicals, while the costs for the health care providers continue sinking.

Biosimilars have resilient supply chains guaranteeing a maximum of security of supply.

How often are biosimilars prescribed?

In 2019, 434 million daily defined doses worth of biopharmaceuticals were prescribed in Germany – excluding the special group insulin. Of those 434 million, 13,3 per cent were biosimilars. The amount of treatment days with biosimilars is increasing continuously throughout Europe. In the first half of 2020, more than two billion treatment days with biosimilars were registered for patients in Europe. Moreover, this number is exponentially increasing and has doubled every 18 months over the course of the past ten years.

Are biosimilars just as effective and safe as the original biological?

Yes. Biosimilars show no clinically relevant differences when it comes to quality, efficacy, and safety. Due to their biological origin, they can never be exactly identical. For this reason, European regulations concerning the supporting documents manufacturers of biosimilars have to provide in the registration and marketing authorisation process have existed since 2003, three years before the first ever biosimilar was authorised in the EU. The quality and safety of the manufacturing process is regulated with great attention to detail and contains strict standards and specifications concerning the marketing authorisation requirements, production processes and quality controls. The entire manufacturing process is continuously monitored and controlled by German and European authorities.

How are biosimilars distinguished from the original?

In terms of safety, efficacy and quality there are no noteworthy differences between the original reference product and its biosimilar. Due to the biological origin of all biopharmaceuticals, however, no production batch is completely identical to the next. This inherent biological variability applies not only to the relation between original reference products and their biosimilars, but also between different biosimilars with the same original, and even among different production batches at the same production site producing the same pharmaceutical preparation (original as well as biosimilar). However, this variability is so minor, that it has no effect on the efficacy, quality or safety of the biopharmaceutical.

Yes! After the patent of a biological expires, several manufacturers can start manufacturing, provided they applied for registration and marketing authorisation beforehand. To do this, they have to establish their own production process as well as conduct laboratory tests regarding the efficacy and compatibility of the biosimilar, followed by clinical studies. Nevertheless, the registration and marketing authorisation of a biosimilar requires a less comprehensive study programme than that of the initial supplier. Accordingly, biosimilars manufacturers can offer their preparations at a lower price.

For example: In 2018, after the patent expiration of the worldwide highest-selling pharmaceutical Humira® with the active pharmaceutical ingredient adalimumab, which is used to treat auto-immune diseases such as rheumatoid arthritis and Crohn’s disease, three biosimilar suppliers were readily available. Moreover, at the time of their entering into the market, these biosimilars were up to 36 per cent cheaper than the initial supplier’s preparation.

Can a biosimilar be switched with the original preparation?

The marketing authorisation by the European Medicines Agency (EMA) is a seal of quality. The registration and authorisation process assesses not only the quality and safety of the biosimilar, but also its similarity to the reference product in terms of efficacy for different indications, therefore defining which patients and treatments it can be used for. For biosimilars authorised by the EMA, this means that they are equivalent in efficacy and safety and considered an adequate alternative from a doctor’s perspective. For all biologicals – including biosimilars – the decision over whether a biopharmaceutical should be switched or substituted with another one is entirely up to the attending physician.

How are biosimilars developed?

The development of biosimilars is complex and time-consuming. First, extensive analyses of the initial supplier’s preparation are conducted. Next, comprehensive studies are necessary to prove that there are no clinically relevant differences as distinguished from the original. Generally, biosimilars are subject to the same set of regulations regarding quality, efficacy and pharmaceutical safety as patent-protected biopharmaceuticals. The marketing authorisation of biosimilars used throughout Europe is exclusively carried out by the EMA.

Why don’t the prices of biosimilars sink as much as those of generics?

The production of biopharmaceuticals is more complex and time-extensive than that of generics, which is why manufacturers can only lower the prices up until a certain degree. However, biosimilars create many savings opportunities in the health care system, not just by lowering the prices: once biosimilars enter the market, the competition is reignited, which not only leads to sinking prices of biosimilars and initial supplier’s preparations, but also expands, and in many cases accelerates, the access to pharmaceutical therapies with biologicals for patients in general.

Additionally, due to competition pressures, the health insurance providers can more easily close contracts with pharmaceutical manufacturers, which create further savings for the health care system. Some active biopharmaceutical ingredients have already been included in the German reference pricing system and have been allocated a fixed reference price – another way to create savings for the system, apart from price reductions by manufacturers.

Video “What is a biosimilar?”

In our video “What is a biosimilar?” we explain the most important information in a nutshell.

To the Video (in German) 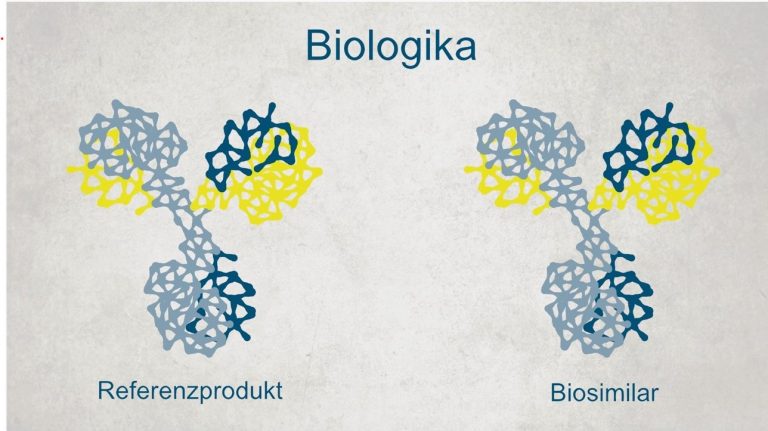